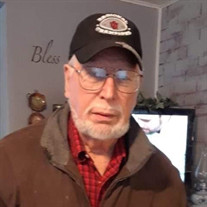 Richard E. Byrd, age 83, of Remington, Ind., passed away Thursday, June 11, 2020 at Franciscan Health of Lafayette. The son of Everette and Ardith (Schriener) Byrd, he was born on December 15, 1936 in Rensselaer, Ind. Richard graduated from Remington High School as a member of the Class of 1956. For over thirty years, he was employed as a fertilizer plant manager at W.R. Grace Company in Remington, Ind. He also worked at the Jasper County Highway Department for eleven years and as a maintenance manager for the Pine Apartments in Remington, Ind. On March 28, 1981, he married Barbara Harris, who preceded him in death on April 13, 2009. Richard was a member of the First Christian Church in Remington, Ind. He enjoyed hunting Indiana game birds. For many years, he played basketball in private leagues. He is survived by his four sons, Richard W. (Tonya) Byrd of West Lafayette, Ind., Jeffery A. (Roxane) Byrd of Remington, Ind., Michael Byrd of Monticello, Ind., and Gregory S. (Jean) Chastain of Boston, MA. Also surviving are nine grandchildren, eight great-grandchildren, and his sister, Donna Byrd of Remington, Ind. He was preceded in death by his loving wife, Barbara, his first wife Carol, his parents, and his sister, Delila Byrd. Friends and family are invited to a visitation at Jackson Funeral Chapel in Rensselaer, Ind. on Monday, June 15, 2020 from 4-8pm CDT. A funeral service will take place on Tuesday, June 16, 2020 at 10:00am CDT. Burial will immediately follow at Remington Cemetery in Remington, Ind. Memorial contributions in Richard’s name may be made to Voices of Hope at https://www.thevoicesofhope.org/.

Richard E. Byrd, age 83, of Remington, Ind., passed away Thursday, June 11, 2020 at Franciscan Health of Lafayette. The son of Everette and Ardith (Schriener) Byrd, he was born on December 15, 1936 in Rensselaer, Ind. Richard graduated from... View Obituary & Service Information

The family of Richard E. Byrd created this Life Tributes page to make it easy to share your memories.

Send flowers to the Byrd family.