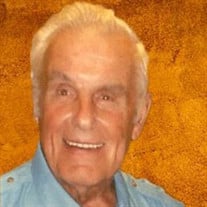 Richard James Dennis, age 90, of DeMotte, Indiana passed away peacefully at his home on Wednesday, September 1, 2021. He was born on January 1, 1931 in Marlborough, Mass., the son of Morton and Dorothy (Mawry) Dennis. On May 15, 1955, he married the love of his life, Kathleen Rose Denson, who proceeded him in death on October 18, 2019. Richard graduated from Newark Community High School and also attended the police academy. In 1950, Richard enlisted in the United States Air Force and served his country during the Korean War. He later enlisted himself and served with United States Marine Corps Reserve. He served God, Country and Corps. Richard also served his community as a Police Officer with the Harvey, South Holland and Glenwood, IL city police departments. He eventually retired as a truck driver from Roadway Trucking, a vocation, he truly enjoyed. Richard was a member of the Cottage Grove Christian Reformed Church in South Holland, IL. He enjoyed keeping himself busy by building models, including airplanes and other types of vehicles, making bird houses and bird watching. He also enjoyed and was fascinated with watching the bison herd roam over their 1,000 acres at Kankakee Sands. Above all, Richard loved his family and spending time with his children. He is survived by six children, Cindy (Garry) Wollenzien of Alsip, IL, Christina (Paul) Bennett of Kingwood, TX, Roger (Dawn) Dennis of Allegan, MI, Richard (Karin) Dennis, Jr. of Peotone, IL, Peter Dennis of Munster, IN, and Ruby Dennis of DeMotte, IN; Loving grandfather to Crystal (Manly) McIlwain, Jordan (Meghan) Bennett, Jade (Eric) Mueller and Sarah Dennis; great-grandfather of Kaiden, Pierce, Kenzie and Zoey. He is also survived by one brother, Robert Dennis of Walker, Minnesota. Richard was preceded in death by his wife, Kathleen, his parents, two brothers and one sister. A graveside service will be held at 1:00PM on Thursday, September 9, 2021 at the Abraham Lincoln National Cemetery, Elwood, IL with full military rites. Jackson Funeral Service of DeMotte has been entrusted with his services. Memorials may be made to the Wounded Warrior Project in Richard’s memory by visiting https://www.woundedwarriorproject.org

Richard James Dennis, age 90, of DeMotte, Indiana passed away peacefully at his home on Wednesday, September 1, 2021. He was born on January 1, 1931 in Marlborough, Mass., the son of Morton and Dorothy (Mawry) Dennis. On May 15, 1955, he married... View Obituary & Service Information

The family of Richard James Dennis created this Life Tributes page to make it easy to share your memories.

Send flowers to the Dennis family.