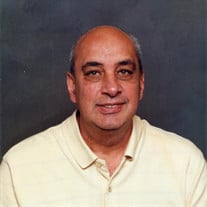 Richard Lee Samuels, 66, formerly of De Motte, IN died Friday, May 1, 2020 at Ascension St. Vincent Hospice in Indianapolis, Indiana. Richard was born on June 21, 1953 in Rensselaer, Indiana to John and Charlotte (Punter) Samuels. Richard was raised in DeMotte and attended school in DeMotte and in Rensselaer. He lived in New Castle, IN for twelve years and more recently in Covington, IN. Richard worked at odd jobs and through sheltered workshops. Richard married Tammy L. Molden, July 16, 1994. He was preceded in death by his wife and parents. Richard is survived by his sister Dr. Frances (Dr. Jim) Schoon of Danville IL, three nephews Dr. Michael (Lyrna) Schoon of Scottsdale AZ, Ryan (Jetta) Schoon of Evansville IN, and Mark (Zee) Schoon of Atlanta GA. Also surviving are five great nieces and two great nephews. Richard loved seeing and talking with his nephews and their families. Richard attended the DeMotte Methodist church and was a member of Royal Neighbors. He was an avid fan of sixties rock and roll, especially the Beach Boys. He loved attending music concerts and could recall many details of different groups. Richard will be remembered for his smile and love of his family. Due to the current health crisis, all services are private at this time. He will be buried in the DeMotte Cemetery. His family would like to thank the nursing and health care staff of The Waters of Covington care center and the medical and nursing staff of Ascension St. Vincent Hospital and Hospice for the excellent and loving care that he received. In lieu of flowers, memorials may be made to the National Alliance on Mental Illness (NAMI) or the Parkinson’s Foundation.

The family of Richard Lee Samuels created this Life Tributes page to make it easy to share your memories.

Send flowers to the Samuels family.