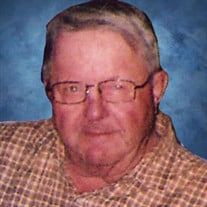 Richard Arthur Scheurich, 88, of Rensselaer passed away Monday, August 5, 2019 at Franciscan Health Rensselaer. He was born in Rensselaer, Indiana on February 15, 1931, the son of Carl Henry and Gertrude Margaret (Borntrager) Scheurich. Richard was a lifelong resident of Rensselaer, graduating with the Class of 1949 from Rensselaer High School. He enlisted into the U.S. Navy where he served from March, 1952 to March, 1956. On May 3, 1958, Richard married his lifelong love, Diana Marie McCord, who survives. Richard was a third generation farmer and was proud to carry on the family tradition of working the land. He was a member of the St. Augustine Catholic Church in Rensselaer, the Knights of Columbus, Council #1881 and was a past member of the Newton Township Advisory Board. Surviving with his loving wife Diana are four son’s, Mark (Dawn) Scheurich, David Scheurich, and Pat (Chris) Scheurich all of Rensselaer and Jeff (Shannon) Scheurich of Wheatfield, Indiana; 11 Grandchildren, 1 Great-Granddaughter and a sister-in-law Bessie Scheurich of Rensselaer. Richard was preceded in death by his parents Carl and Gertrude, an infant son, Michael, a son, Tim Scheurich, a daughter-in-law, Melissa Scheurich and his brother, Robert Scheurich. Friends may visit with the family Wednesday, August 7, 2019 from 2:00 to 8:00 p.m. CDT at the Jackson Funeral Chapel in Rensselaer. Funeral mass for Richard will be held Thursday, August 8, 2019 at 10:30 a.m. CDT at the St. Augustine Catholic Church in Rensselaer with Fr. Don Davison officiating. Burial will follow at Mt. Calvary Cemetery in Rensselaer. Memorials may be made to the St. Augustine Catholic Church or the Knights of Columbus, Council #1881 of Rensselaer.

The family of Richard Arthur Scheurich created this Life Tributes page to make it easy to share your memories.

Send flowers to the Scheurich family.