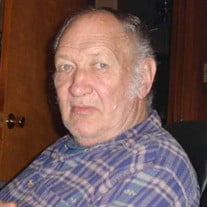 Robert “Bob” Earl Sherman, 84, of Demotte, Indiana, passed away on Sunday, August 29, 2021. Bob was born in Gary, IN on October 8, 1936, the son of Robert and Gertrude (Roeder) Sherman. Bob graduated from Crown Point High School. On July 28, 1962, he married Barbara Jane Heath, in Crown Point, IN and she passed away on June 3, 2020. Bob worked as a machinist at Simmons Mattress for twenty years in various locations. He also worked at American Steel and BNC Machine Shop in Rensselaer. He served in the United States Army as well. Bob was affiliated with the Demotte United Methodist Church. He especially enjoyed riding his motorcycle. Bob is survived by his children, James (Gail) Sherman of Rome, GA and Brian (Jane) Sherman of Rensselaer, IN; nine grandchildren and seven great grandchildren. Bob was preceded in death by his parents, Robert and Gertrude, his brother, George Sherman, daughter, Robin Sehorn, and two granddaughters, Kristen and Ashley Sherman. Jackson Funeral Service of Demotte has been entrusted with the arrangements. Friends may call upon the family at Jackson Funeral Service from 10:00-11:00 a.m. on Saturday, September 4, 2021. A Funeral Service will follow at 11:00 a.m. Interment will occur at Demotte Cemetery to include a flag folding ceremony. Memorial contributions may be made to Riley Hospital for Children, www.rileychildrens.org

The family of Robert "Bob" Earl Sherman created this Life Tributes page to make it easy to share your memories.

Send flowers to the Sherman family.