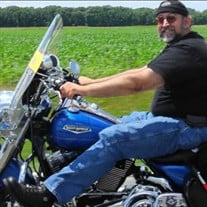 Robert Jay Byrd, 60, of Rensselaer, passed away Sunday, November 14, 2021 at his residence. Robert was born in Red Bank, New Jersey on November 22, 1960, the son of AJ and Marie (Pack) Byrd. Robert graduated from Raceland High School in Kentucky with the Class of 1978. Robert briefly served in the US Army and then he worked as an Operator at Leggett & Platt for thirty-two years. Robert attended Hope Community Church. He was a member of the Indiana Patriot Guard and several clubs to include, the Iroquois Archery Club, NRA, Harley Davidson group, ABATE of Indiana motorcycle club, and SASS club for old West shooting. Robert was also a very avid fisherman and ham radio fan. He was on the advisory board and net coordinator for ARANCI, Amateur Radio Association of Newton County Indiana. Robert is survived by his siblings, Diane “Cookie” Burge of Beverly Hills, FL, Leta Collins of Beech Creek, WV, Anita (Devon) Gordon of Louisville, KY, Alan Byrd of Ashland, KY, and Amy Houle of Rensselaer, IN; many nieces and nephews. Robert was preceded in death by his parents, AJ and Marie. Friends may call on the family at Jackson Funeral Chapel of Rensselaer on Tuesday, November 23, 2021 from 4:00 p.m. to 7:00 p.m. A funeral service will be held immediately following at Jackson Funeral Chapel at 7:00 p.m. with Pastor Ken Smith officiating. In lieu of flowers, donations may be made to the family and/or the Amateur Radio Association of Newton County Indiana, both c/o Amy Houle at Alliance Bank Rensselaer Branch.

The family of Robert Jay Byrd created this Life Tributes page to make it easy to share your memories.

Send flowers to the Byrd family.