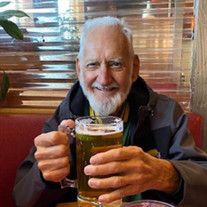 Robert J. ”Bob” Vigeant, 93 1/2, formerly of Rensselaer, IN, died October 26, 2021 in Zephyrhills, FL. He was 10 years predeceased by his wife of 52 years, Jeanette M. “Jan” Vigeant. Born the sixth of seven children to the late Arthur and Aurore (Guertin) Vigeant on April 26, 1928 in Worcester MA, he attended St. Joseph’s Catholic Schools and received his BA in Liberal Arts from Assumption College. After earning a Master in Library Science from Simmons College in Boston, he met Jan in the stacks of the Detroit Public Library where they were both working as librarians; they married in Detroit on July 4, 1959. He worked in public libraries in Sault Sainte Marie, MI, Ithaca, NY and Haverhill, MA before embarking on a career in academia. He served 4 years at Washington and Lee University in Lexington, VA before his final position of Head Librarian at St. Joseph’s College from 1975 until his retirement in 1993. He was well loved and appreciated by his employees as he was respectful, kind and fair to all. Bob was generous with his time, energy and money. Over the years he served his church and community in various capacities; he was one of the founding members of the Good Samaritan Food Pantry, originating in the basement of St. Augustine. He and Jan donated to numerous charities and he gave blood on a regular basis; the bulk of his wardrobe was made up of “donor” shirts! Bob was genuinely interested in others and saw the good in everyone; he had a way of making people feel loved and important. He also had quite a sense of humor, and was never afraid to poke a little fun at himself. Silly and good natured, he was aﬀectionately referred to by many of his friends in Zephyrhills as “One-Beer-Bob”. He lived a rich retirement life full of his faith and church, caring for Jan, volunteer work and regular social engagements. He happily and very gratefully spent his final year living with his beloved daughter and son-in-law, who provided him with loads of love, support, fun and antics! Although not one to take himself too seriously, he took his duty to constantly and consistently serve others very seriously. He was a devoted husband to Jan whom he loved dearly and for whom he cared dedicatedly during her final decade of failing health. He was also a wonderful and beloved father, grandfather and great-grandfather. He often said he was at ease with meeting the Lord as he had lived a fulfilling and good life. His generous, loving and peaceful nature, deeply grounded in his faith, is his legacy and a blessing to his family, friends and many, many more. In addition to Jan and his parents, Bob was predeceased by all of his six siblings: Arthur, Sister Florence SSA, Alphonse, M. Therese (Durocher), Lucien and Gerald. He is survived by his four children: Therese, Thomas, Marie (Donald) Gandy and Jeanne; 7 grandchildren: Taunia (Ryan) Rients, Thomas (Dr. Carrie Spader) Vigeant, Travis (Jennifer) Vigeant, Jason (Amanda) Tieke, Christina Gandy, Madison and Melissa Hirsch; 7 great-grandchildren: Shianne, Michaela, Cierra, Ethan, Isaac, Jackson and Lincoln. The Funeral Mass was celebrated on October 29, 2021 at St. Joseph’s Church in Zephyrhills FL. A Memorial Mass will be celebrated at St. Augustine Church, Rensselaer at 1:00PM, Saturday June 11, 2022. Burial will follow in Mt. Calvary Cemetery, Rensselaer.

The family of Robert J. "Bob" Vigeant created this Life Tributes page to make it easy to share your memories.

Send flowers to the Vigeant family.