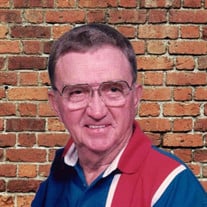 Robert E. “Fake” Lyons, age 98, of Rensselaer, Indiana, passed away on July 4, 2021, at Autumn Trace in Rensselaer, IN. Robert was born in Beaver City, IN on August 15, 1922, the son of Orpheus and Ida (Floyd) Lyons. Robert graduated from Brook High School with the Class of 1940. He was a lifelong farmer. He also worked previously at Wright’s Furniture and delivering fertilizer for Farm Bureau Co-Op. Robert married Anna Mae Miller on February 19, 1947, in Rensselaer, IN, and she preceded him in death on November 20, 2014. Together, they raised two children. He was a member of Trinity United Methodist Church in Rensselaer. Robert enjoyed playing golf and was an avid euchre and solitaire player. He loved to dance and vacation in Florida. Robert is survived by his children, David (Julie) Lyons and Ned (Ann Gwin) Lyons, both of Rensselaer, IN; grandchildren, Molly Ann (Russell) Casper of Sparks, NV, Amanda Marie (Tony) Sinclair of Lafayette, IN, and Keaton (Baylea) Lyons of Indianapolis, IN; three great-grandchildren; one brother, Larry (Becky) Lyons of Lafayette, IN. Robert was preceded in death by his wife, parents, five sisters and two brothers. Friends may visit with the family from 10:00 AM to 12:00 PM, Friday, July 9, 2021 at Jackson Funeral Chapel of Rensselaer. A funeral service will follow at 12:00 PM at Jackson Funeral Chapel with Mr. Russell Overton officiating. Interment will take place at Memory Gardens of Rensselaer, IN. Jackson Funeral Chapel of Rensselaer has been entrusted with the arrangements. Memorial contributions may be made in Robert’s honor to Trinity United Methodist Church, 107 E. Angelica Street, Rensselaer, Indiana, 47978.

The family of Robert E. Lyons created this Life Tributes page to make it easy to share your memories.

Send flowers to the Lyons family.