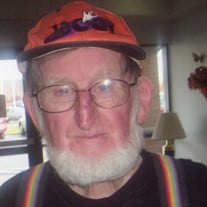 Robert (Bob, the Sign man) D. Putts Sr. passed away on May 30, 2018 at the age of 88. A true die-hard Cubs fan, he suffered a stroke while watching the Cubs beat the Pirates on the evening of May 29th• He was rushed to IU Health Arnett in Lafayette, IN, and passed away without regaining consciousness early the next morning. Bob and his identical twin brother Richard (Dick) were born on January 16, 1930 in Rensselaer to Louis and Reba (Hawkins) Putts. He attended Rensselaer High School, Class of 1949. Bob joined the Air Force with his twin in August of 1952 and served until August 1955. Although he enlisted during the Korean War, the war was officially over by the time he was stationed in Korea. In his later years, Bob loved to tell stories about how him and his twin brother would switch places and fool the officers particularly during Motor Pool assignments. According to him, this was also a common practice while in school as well. In 1959, he married Betty Norris (deceased) and had five children, Carol Burns, Rensselaer, Robert D. Putts Jr., William Putts (deceased), Sheila K. Brandenburg, Maryland, and Fredrick J. Putts, Nuremberg, Germany. He was divorced in 1977. He was married to his second wife, Geraldine (Geri) Baldwin, from June 10, 1989 until her death on July 26, 2010. Bob was probably best known for his magnetic sign business which he started as a side line during the last 1960's. He continued making signs until 2017 when he came out of retirement in order to make signs commemorating the 2016 Cubs World Series Championship. There was no mistaking whose car was driving around town because it was always plastered with signs from one end to the other. Bob was a lifetime member of the VFW Post #1279. One of his most enjoyable pastimes was going to fairs to set up booths to sell his signs. Once he retired, he stilled enjoyed driving along the interstates and planning out road trip s. His one regret was that he did not become a truck driver after returning from the military. Bob is survived by his sister, Anita Gagin, Illinois, four of his five children, eight grandchildren, and four great-grandchildren. He was preceded in death by his parents, his brothers, Joe, James, and Richard, his sister Rita Marie Putts and his son William (Bill). Friends may call at the Jackson Funeral Chapel of Rensselaer Saturday, June 9, 2018 from 9:00-11:00 a.m. Graveside services with military rites will be held on Saturday, June 9, 2018, at the Burr Oak Cemetery at 11:30 a.m. with Philip Leichty officiating. Memorials may be made to the family.

Robert (Bob, the Sign man) D. Putts Sr. passed away on May 30, 2018 at the age of 88. A true die-hard Cubs fan, he suffered a stroke while watching the Cubs beat the Pirates on the evening of May 29th&#8226; He was rushed to IU Health Arnett... View Obituary & Service Information

The family of Robert D. Putts Sr. created this Life Tributes page to make it easy to share your memories.

Send flowers to the Putts family.