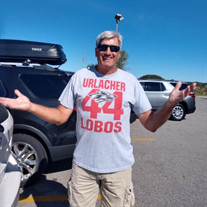 Robert “Bob” Glenn Tanis, 62, of Rensselaer, IN, passed away on October 17, 2021 in Indianapolis, IN. Bob was born on October 22, 1958, in Hammond, IN, the son of Glenn and Beulah (Willette) Tanis. Bob attended Thornwood High School in South Holland, IL. He moved to Albuquerque, NM in 1978 where he met, and later married, Debra Lente on December 2, 1983. In 1997 when Bob returned to the Midwest, he worked at Tillett Engineering Services, Inc before finding his niche at FBI Builders, Inc where he worked as a Foreman for over twenty years. He then went on to substitute teach for the Rensselaer Central School Corporation after retiring from FBI at the end of 2020. Bob was a member of the Calvary Chapel Church in Lafayette, IN. He was a diligent student of God’s word, and equipped with it, was a leader and mentor to many that he worked with not just in the church as an Elder, but also at any jobsite he came to, or neighbor who needed a hand. He was always serving others. Bob enjoyed making a positive impact on, and sharing his faith with, the younger generation. This is evident in the youth ministry he led at Young Life in Albuquerque, NM and for the many years he served as Youth Pastor at Calvary Chapel. He was a loving and faithful husband, father, brother, and friend; but above all a faithful servant of the Lord. Bob is survived by his loving wife, Debra; children, Ryan (Sarah) Tanis of Remington, IN, Jamie (Cameron) Farrell of Celeste, TX, and Jennifer (Chris) Cooper of Campbell, TX. He was Grandpa to nine grandchildren, Jaxon and Grayson Tanis, Abigail, Liam, Ellie, and Miriam Farrell, and Katelyn, Madelyn, and Zachary Cooper. He is also survived by his five sisters Lynn Zegers of Laguna Woods, CA, Karen Klein of Hammond, IN, Elsie (Cliff) Selby of Rensselaer, IN, Julie (Robin) Hernaez of Temecula, CA, and Sherry Bult of Hammond, IN; and finally, his father-in-law, Arthur Lente, his mother-in-law, Erma Lente, nieces and nephews. He was preceded in death by his parents, Glenn and Beulah; two brothers, John Tanis and Paul Tanis; and one brother-in-law, Rich Zegers. Friends may call on the family on Sunday, October 24, 2021 from 3:00 PM to 4:00 PM EST at Calvary Chapel of Lafayette, IN. A Funeral Service will be held immediately following at 4:00 PM EST at Calvary Chapel with Pastor Joe Bell officiating. Jackson Funeral Chapel of Rensselaer has been entrusted with the arrangements. The family encourages attendees to dress in “Bob fashion”, wearing a Hawaiian dad shirt or one of Bob’s favorite Chicago sports teams (Bears, Bulls, Blackhawks, and White Sox). Memorials may be made in memory of Bob to the Calvary Chapel Youth Group, 2111 E. State Street, Lafayette, IN 47905.

The family of Robert "Bob" Glenn Tanis created this Life Tributes page to make it easy to share your memories.

Send flowers to the Tanis family.