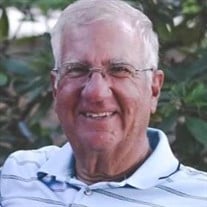 Roger D. Cummings, age 73, of Rensselaer, Indiana died December 16, 2019 at his home. He was born September 2, 1946 in Rensselaer, the son of Prentice and Doris (Rockwell) Cummings. Roger graduated from Rensselaer Central High School with the class of 1964 and from International Business College in 1966. Roger served in the United States Navy from 1967 to 1971. On February 26, 1972, in Rensselaer, Roger married Judith Ilene Torbet. Roger began his career in banking in 1971. He was employed with People’s State Bank in Francesville, Indiana where in 1992, he was appointed to the position of bank president. Roger retired in 2010 from Alliance Bank, formerly known as People’s State Bank. Roger was an active member of the First Christian Church of Francesville. He served on numerous boards and enjoyed acts of service in communities around him. Roger took great pride in serving with the Humanitarian Distribution Center, helping to distribute food to 48 food pantries in the surrounding counties. When not serving, Roger enjoyed sharing his love of fishing with others. Roger is survived by his loving wife of 47 years, Judy (Torbet), their three children, Chad (Toni) Cummings; Brian (Raendra) Cummings; and Sara (Phil) Kostaroff; grandchildren, Chase, Alyssa and Addie Cummings, Clayton, Collin and Cameron Cummings, and Ava, Ainsley, Caleb and Lizzy Kostaroff. Roger is also survived by his siblings, Janet (Steve) Hurley, Donn (Tanya) Cummings, Carol (Steve) Gottschalk and Anne (Duanne) Judd; his parents-in-law, Jeryld and Tina Torbet and sister-in-law, Jacquie (Garry) Wiltfang. Roger was preceded in death by his parents, his sister-in-law, Janet Fox, and his brother-in-law and sister-in-law, Steve and Joyce Lane. Friends will be received at the Jackson Funeral Chapel in Rensselaer on Thursday, December 19, 2019 from 2:00 to 8:00 p.m. CST. Funeral services for Roger will be held on Friday, December 20, 2019 at the First Christian Church of Francesville at 11:00 a.m. EST (10:00 a.m. CST) with Minister James Ketchen officiating. Burial will follow at Weston Cemetery in Rensselaer with Military Honors. Donations in memory of Roger are suggested to the First Christian Church of Francesville, P.O. Box 326, Francesville, IN 47946 or to the Humanitarian Distribution Center, P.O. Box 707 Francesville, IN 47946.

The family of Roger D. Cummings created this Life Tributes page to make it easy to share your memories.

Send flowers to the Cummings family.