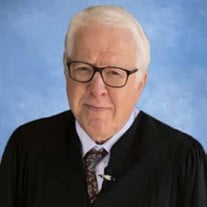 Roger Allen Hartzler, age 76, of DeMotte, Indiana passed away on Sunday, May 22, 2022 at Southlake Methodist Hospital, Merrillville. On March 9, 1946, Roger was born in Goshen, Indiana to Nolen Hartzler and Alberta (Augsburger) Rensberger. He graduated from Topeka High School, Topeka, Indiana, attended Hesston College in Hesston, Kansas and graduated from Goshen College. Roger married Deborah Lynn Oswald on January 22, 1972 in Kouts, Indiana and she survives. He taught at Greasewood Boarding School on the Navajo Reservation in Arizona. He also taught math and accounting in Junior Colleges. In 2004, Roger became a lay pastor. He has been the current pastor at First Presbyterian Church of Kouts since 2016. He is also a member of the Presbytery of Wabash Valley. Roger is survived by his loving wife of 50 years, Debbie Hartzler of DeMotte, IN; children: Timothy (Kim) Hartzler of Chesterfield, VA; Megan (Jack) Beatty of Indianapolis, IN; Rebecca (Tim) Hauber of Indianapolis, IN; 5 grandchildren: Taylor (Andrew) Herner, Lauren & Mark Beatty, and Kaitlyn & Levi Hauber. He is preceded in death by his parents, and brother, Keith Hartzler. Friends and family may visit on Tuesday, May 31, 2022 at First Presbyterian Church of Kouts from 10:00 AM until 12:00 PM. A funeral service will promptly follow at 12:00 PM at the First Presbyterian Church of Kouts on May 31, 2022 with Pastor Joel Short officiating. Memorial contributions may be made in Roger’s name to the charity of the donor’s choice.

The family of Roger Allen Hartzler created this Life Tributes page to make it easy to share your memories.

Send flowers to the Hartzler family.