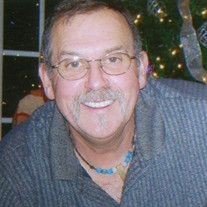 Ronald D. Canaday, age 68, of Rensselaer, passed away peacefully at Vibra Hospital in Crown Point on Friday, March 9, 2018. Ronald was born on March 2, 1950 in San Francisco, CA, the son of Kenneth & Christa (Bruner) Canaday, both deceased. Ronald graduated from Morton High School in Hammond, IN, the Class of 1968. On August 8, 1981, in Lake Village, Indiana, he married Sandra Belt, who survives. Ronald retired from Reiter Industries, Inc. and US Steel where he was employed as a maintenance mechanic for more than 20 years of employment. He was Vietnam veteran of the United States Army and was a member of the American Legion Post #375, Lake Village, Indiana. Ronald had many passions and lived his life to the fullest. He enjoyed fishing, traveling, camping, working on his Jeep, listening to classic rock music, attending his grandchildren’s sporting events, motorcycles, assembling models, antiquing and of course, a cold beer afterwards. However, his most enjoyment came from spending time with his family, especially his grandchildren. Ronald received a heart transplant in February 2007 for which he was most grateful and appreciative. Prior to his death, he asked for the opportunity to give back and was successful in being an eye donor, a beautiful gift of sight to someone in need. Honor Thy Donor. Ronald is survived by his wife, Sandra, son, Deric (Mindy) Beier of Rensselaer; daughter Danielle (Alan) Street of Kokomo, Indiana; one brother, Rick (Debbie) Canaday of Goshen, IN; a sister-in-law, Kathy Peck; two grandchildren, Brie & Broc Beier and two grand-dogs, Ellie & Sammy. He was preceded in death by his parents and one brother, Randy Canaday. Friends are invited to visit with his family on Tuesday, March 13, 2018 from 4:00 - 8:00 PM at the Jackson Funeral Chapel of Rensselaer. The American Legion Poppy Service will be conducted Tuesday at 7:30 P.M. at the funeral chapel by the Lake Village American Legion Post #375. Funeral services will be held on Wednesday, March 14, 2018 at 11:00AM at Jackson Funeral Chapel of Rensselaer. Interment will follow at Weston Cemetery in Rensselaer. Memorials may be made to Hines Fisher House, 5000 S 5th Ave; Hines, Illinois 60445.

The family of Ronald D. Canaday created this Life Tributes page to make it easy to share your memories.

Send flowers to the Canaday family.