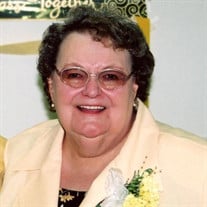 Rosemarie Lansdown, age 82, of Morocco, Indiana, passed away on February 23, 2018 at the Rensselaer Care Center. She was born in Chicago, Illinois on September 3, 1935 to the late William and Marian (Styczyski) Siekierski. Rosemarie was a 1953 graduate of Alvernia High School, in Chicago, Illinois. On May 28, 1955, Rosemarie married Bob Lansdown at Our Lady of Grace Church in Chicago. Together, they moved to Indiana and resided in the Highland and Griffith areas. Then, in 1972, they moved to their country home in Morocco, Indiana. When their children were young, Rosemarie still found the time to be active in her community. She served on the Newton County 4-H Council, the Newton County Extension Board and served as an associate on the Newton County Fair Board. She wrote articles for the Morocco Courier Newspaper from 1986 to 1989 and was a home healthcare aid for the former Jasper County Hospital, eventually retiring in 1997. She was a member of St. Augustine Catholic Church in Rensselaer where she served with the St. Augustine Christian Women, a C.P.P.S Companion and worked with the Rite of Christian Initiation of Adults (R.C.I.A.) for many years. During her quiet time, she enjoyed crocheting and knitting. Rosemarie is survived by her husband, Bob Lansdown and two sons, William Lansdown of Morocco, IN & Robert Lansdown of Kentland, IN. Also, surviving is four grandsons and two great-grandsons. Friends are invited to visit with the family at the St. Augustine Catholic Church on Tuesday, February 27, 2018 at 10:00AM. A Funeral Mass will be held immediately following at 11:00AM with Father Don Davison officiating. Interment will follow at Murphy Cemetery in Morocco, Indiana.

Rosemarie Lansdown, age 82, of Morocco, Indiana, passed away on February 23, 2018 at the Rensselaer Care Center. She was born in Chicago, Illinois on September 3, 1935 to the late William and Marian (Styczyski) Siekierski. Rosemarie was a... View Obituary & Service Information

The family of Rosemarie Lansdown created this Life Tributes page to make it easy to share your memories.

Send flowers to the Lansdown family.