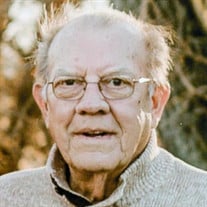 Roy R. “Buzz” Larzelere, age 81, of Fair Oaks, Indiana, passed away unexpectedly on Tuesday, January 19, 2021. Roy was born on December 12, 1939 in Antigo, Wisconsin, the son of Walter & Rose (Morgan) Larzelere. He married Barbara A. (nee Leiter) on January 30, 1960 in San Diego, California. Roy served in the U.S. Navy from 1957-1960 and was a proud veteran. He was a truck driver for over 30 years with Teamster’s Locals 142 & 705, working for Willett Trucking of IN, and Rogers Cartage of IL. His CB handle was “Timberwolf” and his wife, Barb was known as “Little Red Ridinghood”. Roy was a member of Journey Church Assembly of God in Lowell and a local horseshoe group. He enjoyed landscaping, gardening, and cooking. Roy is survived by his wife, Barbara Larzelere of Fair Oaks, IN; his daughters: Shawn (John) Killion of DeMotte, IN; Shannon (Scott) Van Den Bosch of Grand Rapids, MI; Johanna (Walter) Justice of Hebron, IN; and son, Greg (Cindy) Larzelere of DeMotte, IN; 10 grandchildren, 6 great-grandchildren, and 5 sisters. He was preceded in death by his parents and one sister. All services for Roy will be private, family only with Pastor Scott Tomatz officiating. Interment will be held at Roselawn Cemetery with military honors.

The family of Roy R. Larzelere created this Life Tributes page to make it easy to share your memories.

Send flowers to the Larzelere family.