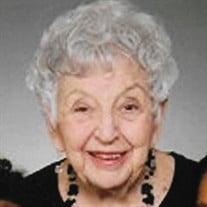 Ruth Ann Shirer passed away peacefully on May 14, 2017, at Pueblo Norte Life Care Facility in Scottsdale, AZ. She was born in Morocco, IN, on November 29, 1920, to Ella Mae (Milk) Kessler and Chester Lee Kessler. Ruth was a resident of Morocco for 90 years prior to moving to Arizona. Following graduation from Morocco High School in 1939, Ruth attended Gallagher Business School in Kankakee, IL. On August 10, 1940, at the Kessler family homestead on Beaver Street in Morocco, she married Robert (Bob) Louis Shirer, whom she met on a blind date. Ruth and Bob spent many winter months in Ft. Myers, FL, from 1980 to 1997. Ruth was a devoted homemaker during Bob’s farming days. After Bob became an insurance agent in 1961, she worked for him as an agent & bookkeeper. Bob eventually owned Shirer Insurance Agency from which both retired in 1982. Ruth was an active volunteer in the Morocco community: 1st United Methodist Church; United Methodist Women; Pythian Sisters; Morocco schools and Projects Unlimited. Ruth was a charter member and president for 1st two years of Projects Unlimited, a women’s organization founded in 1958. She was quite proud of the first project, which was to build Morocco’s swimming pool. The pool opened in 1961 and is still in operation. Even though she enjoyed gardening, playing bridge (especially in their Bridge Couples’ Group), & golfing at Hazelden Country Club, her favorite pastime was spent with her four grandchildren and ten great-grandchildren. Her grandchildren are: Troy Alan (Mari) Shirer, Crown Point, IN; Bradley Scott Shirer, Lafayette, IN; Brett Shirer (Emily) Lindgren, Cheboygan, MI; and Tamara Lee Saunders, Phoenix, AZ. Great-grandchildren are: Brooke Danielle, Natalie Renee, & Justin Robert Shirer, Crown Point, IN; Zachary Scott (Julia Raylian) Shirer, St. Petersburg, Russia; Nicholas Evan & Evan Bradley Shirer, Greenwood, IN; Garrett Connor & Grace Ann Lindgren, Cheboygan, MI; and Savanna Ruth & Adrienne Eva Saunders, Phoenix, AZ. Ruth also has two great-great-grandchildren: Alexa Rose Wilkins, Crown Point, IN and Eva Raylian Shirer, St. Petersburg, Russia. Ruth is survived by her son Robert Lee (Janice) Shirer of Ft Myers, FL, and her daughter Linda Ruth (Ralph) Lindgren of Paradise Valley, AZ. She was proceeded in death by her parents, husband Bob (who passed away 11/5/97), and her brothers William George and Robert Noble Kessler. Besides being willing to assist whenever asked by her children, grandchildren & great-grandchildren, Ruth gave of her time to so many including her mother Ella Kessler, her Aunt Georgia Perry, her cousin Harvey Goddard, and her mother-in-law Victoria Shirer. Always seeing to the needs of her family and friends, she offered love & compassion to all and will be dearly missed. Visitation will be Saturday, August 12 from 10:00 am until 11:30 am at the Morocco 1st United Methodist Church. Ruth’s Celebration of Life follows at 11:30 am with Pastor Wayne Williams officiating. Interment will be at Oakland Cemetery. In lieu of flowers memorials designated for the New Entrance Fund may be made to Morocco 1st United Methodist Church, P.O. Box 502, Morocco, IN 47963. Funeral arrangements are entrusted to Jackson Funeral Chapel of Rensselaer, IN.

Ruth Ann Shirer passed away peacefully on May 14, 2017, at Pueblo Norte Life Care Facility in Scottsdale, AZ. She was born in Morocco, IN, on November 29, 1920, to Ella Mae (Milk) Kessler and Chester Lee Kessler. Ruth was a resident of Morocco... View Obituary & Service Information

The family of Ruth Ann Shirer created this Life Tributes page to make it easy to share your memories.

Send flowers to the Shirer family.