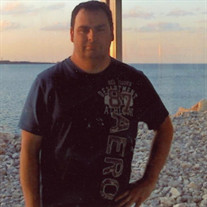 Scott E. Minter, age 42, of Rensselaer, Indiana passed away Thursdday, April 5, 2018, at his mother's home in Parr, Indiana. He was born in Rensselaer, Indiana on June 11, 1975, the son of Marsha L. (Hesson) Nagel and Larry (Lou) Minter, Jr. Scott was a lifetime resident of Rensselaer. He was employed as a farm technician with Indiana Farm Services and formerly worked at Donaldson's Filtration in Rensselaer as a fork-lift operator. Scott's passion was dirt track racing and being artistic. He was an accomplished dirt track race car builder and driver. He was proud to have achieved the title of Dirt Track Champion at the Shady Hill Race Track in 2004 and 2005. Scott was also a member of The Faith Pentecostal Church of God in Rensselaer. He will be dearly missed by his loving family. Surviving, are his mother and step-father, Marsha L. (Steve) Nagel of Parr, IN, father and step-mother, Larry (Lou) Minter, Jr., of Rensselaer, IN, two children, Jordan Minter and Connor Minter both of Rensselaer, and siblings, Robert Smith, Jr., Craig (Carrie) Minter, Ed (Jennifer) Minter and Tracey (Theresa) Smith, Toby (Amy) Minter all of Rensselaer, IN, Rob (Michelle) Harrole, Jr. of Brook, IN, and Tammy Smart of Kentland, IN, his special friend, Dawn Kovach, and many nieces and nephews. Scott was preceded in death by his former, lifelong love and mother of their sons, Lisa Kendall on September 19, 2005, his maternal grandfather, Raymond Hesson, paternal grandparents, Lawrence, Sr. and Dorothy Minter. Friends may call at the Jackson Funeral Chapel of Rensselaer on Tuesday, April 10, 2018 from 4:00 to 7:00 PM. Funeral services will be held on Wednesday, April 11, 2018, at 1:30 PM at the Jackson Funeral Chapel of Rensselaer with Pastor Mark Warren officiating. Burial will follow at Memory Gardens of Rensselaer. Memorials may be made to Jordan and Connor Minter c/o Larry Minter, Jr.

The family of Scott E. Minter created this Life Tributes page to make it easy to share your memories.

Send flowers to the Minter family.