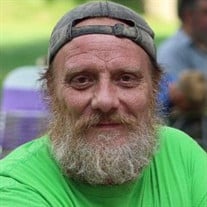 Scott Alan Retzlaff, age 56, of DeMotte, Indiana passed away Thursday, December 26, 2019 at the University of Chicago Medical Center, Chicago, Illinois. Scott was born on October 19, 1963 in Harvey, Illinois, the son of Gene and Bettye (Cockrell) Retzlaff. Scott graduated from Kankakee Valley High School, the Class of 1981. He married the love of his life, Karen Huhn on September 17, 1983 in DeMotte, IN. Scott was the owner and operator of Scott’s Auto Body in DeMotte, since 2007. He was a former member of the Lincoln Township and Keener Township Volunteer Fire Departments and was still an active supporter. He was a past DeMotte Little League Girls Softball coach. Scott loved working on and fixing cars. He was especially fond of Show Cars and served as a judge at many car show events. Scott was also a huge Chicago Bears Football fan and a Harley Davidson Motorcycle enthusiast. Scott was known to many in the community for his generous attitude, kind spirit and sense of humor. Scott is survived by his wife: Karen Huhn Retzlaff of DeMotte, IN; daughters, Kelly Verthein and Miranda Retzlaff, both of DeMotte. Also surviving are two sisters, Kim (Lew) Carver of DeMotte and Missy (Dale) Marshall of Kouts, IN. Scott was preceded in death by his parents. Friends may visit with the family from 2:00 to 8:00 PM on Sunday, December 29, 2019 at the Jackson Funeral Service of DeMotte. A Funeral Service will be held at 10:30 AM on Monday, December 30, 2019 at Jackson Funeral Service of DeMotte with Pastor Jared Mathison officiating. Interment will follow at the DeMotte Cemetery. Memorial contributions may be made to Keener Township Fire Department.

The family of Scott Alan Retzlaff created this Life Tributes page to make it easy to share your memories.