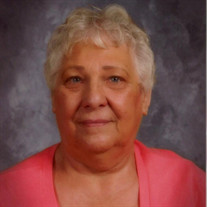 Shirley Jefferson, 83, of Rensselaer, previously of Wheatfield, Indiana, passed away Tuesday, December 29, 2020 at IU Medical in Lafayette, IN. She was born in Hammond, Indiana on February 22, 1937, the daughter of Lester and Shirley (Spiece) Davis. Shirley married Edwin T. Jefferson on September 10, 1955 in Wheatfield, IN and they shared life together for 40 years until Edwin’s death in 1995. Shirley was a resident of Rensselaer for one year and previously resided in Wheatfield, IN since 1951. Over the years, Shirley devoted most of her time to her family but she enjoyed her career at Wheatfield Elementary School, serving as an aide for 28 years. In addition, she had fun selling Avon for many years as well. Shirley was a member of the Wheatfield Baptist Church. She took great joy in raising her children, and eventually her grand- and many great-grandchildren. In her rare spare moments, she loved sewing, crocheting, and traveling. She was also a prolific reader and gardener. She enjoyed getting together with the Bunco Club in Wheatfield and playing bunco. She will be remembered fondly by her entire community. Shirley is survived by her children, Pamela (William) Pavot of Marshall, MN, Rebecka (Stanley) Bryant of Monon, IN, Kimberly (Dale) Hitchcock of Rensselaer, IN, Edwin (Beth) Jefferson of Wheatfield, IN; siblings, Jim (Mayetta) Davis, Bill Davis, Mary Lou (Larry) Whitaker, and Donna (Nick) Sohn, all of Wheatfield, IN, sister-in-law Ora Davis; grandchildren, Whitney (Chris) Morris, Nolan (Casey) Hitchcock, Aaron (Sabrina) Bryant, Melissa Plumb, Lindsey (Robert) Wertz, Lesley (Derick) Marshall, Dominique (Ryan) Fuhr; Kelsey (Andrew) Marcus, Edwin L. Jr. and great-grandchildren, Gavin, Selene, Avigayil, Allyson, Kimberly, Amelia, Morgan, Jaxson, Aaron, Lillian, Hayden, Jayce, Kinzley, Addison, Hudson, Julia, Lorelai, Breslin and Easton. She was preceded in death by her parents, husband, brothers, Ronnie Davis, Bob Davis, and Frederick Davis, grandchildren, Joshua and Megan, and great-grandson, Avery; sister-in-law Jean Davis. The family has chosen to have private services. Jackson Funeral Chapel of Rensselaer has been entrusted with the arrangements. Memorials in loving memory of Shirley may be made to the American Cancer Society. Social distancing, maximum number of people will be enforced, and masks must be worn at all services due to current pandemic.

Shirley Jefferson, 83, of Rensselaer, previously of Wheatfield, Indiana, passed away Tuesday, December 29, 2020 at IU Medical in Lafayette, IN. She was born in Hammond, Indiana on February 22, 1937, the daughter of Lester and Shirley (Spiece)... View Obituary & Service Information

The family of Shirley Jefferson created this Life Tributes page to make it easy to share your memories.

Send flowers to the Jefferson family.