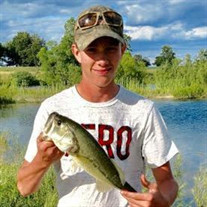 Spencer was born in Rensselaer, Indiana on October 9, 2000, to his loving parents Rodney and Shannon (Greene) Davis. He passed away at Advocate Christ Medical Center, Oak Lawn, Illinois on September 19, 2017 from injuries sustained in an accident. Spencer was always a little bit ornery and stubborn but grew to be the most loving, caring, compassionate and giving boy you would ever meet. Spencer never knew a stranger, gave unselfishly of himself and touched the lives of both young and old with his infectious smile and personality. Spencer was a Sophomore at Rensselaer Central High School where he was a member of the Rensselaer FFA and a member of the St. Augustine Catholic Church in Rensselaer. He was an eight year Jasper County 4-H member where he was active in many projects including showing swine, tractor driving, and lawn and garden. Spencer loved being outdoors fishing, skeet shooting, riding his 4-wheeler, driving his “Red” truck and working on vehicles. If you needed something done all you had to do was ask and Spencer would be there. He enjoyed working on the family farm with his dad. He also worked for Randy Lewis, lent a hand to Culp Farms, the Schultz family and baled hay for many friends and neighbors. His relationship with his sisters was nothing short of teasing, love and laughter. His goal in life was to give to others, so his gift of being an organ donor will allow his caring soul to live on and save other young lives. Spencer would have been 17 on October 9th of this year and is loved dearly by his family and many friends. He loved everyone unconditionally and will be greatly missed. Surviving with his parents, Rodney and Shannon Davis of Rensselaer are two sisters, Riley and Bailey Davis, both of Rensselaer; his maternal grandmother Marsha Walker of Rensselaer; paternal grandparents Bill and Rosie Davis of Rensselaer; maternal aunts and uncles, Michael (Annie) Greene of Jamestown, Indiana and Cory Walker of Rensselaer, paternal aunt and uncle, Jonell (Aaron) Wade of Centerville, Ohio, and his cousins Aubree, Ethan, A. J., Lexi and Sabrina. Spencer was preceded in death by his maternal grandfather, the late Master Trooper Michael E. Greene who passed away on February 5, 1993. The family is requesting ‘Spencer’ attire for all services (jeans, flannel shirts, t-shirts, boots, etc) as he was a very casual, down-to-earth person. Friends will be received at the Jackson Funeral Chapel of Rensselaer, 250 N. McKinley Ave., on Thursday, September 28, 2017 from 12:00 p.m. to 8:00 p.m. CST. Funeral services for Spencer will be held on Friday, September 29, 2017 at 10:30 a.m. CST in the Show Arena at the Jasper County Fairgrounds, 2671 W. Clark St., in Rensselaer, with Dr. James Blanchard officiating. Memorials may be made to the family c/o Rod and Shannon Davis.

Spencer was born in Rensselaer, Indiana on October 9, 2000, to his loving parents Rodney and Shannon (Greene) Davis. He passed away at Advocate Christ Medical Center, Oak Lawn, Illinois on September 19, 2017 from injuries sustained in an accident.... View Obituary & Service Information

The family of Spencer Michael William Davis created this Life Tributes page to make it easy to share your memories.