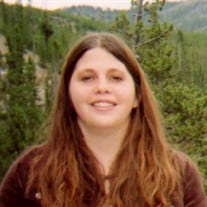 Stephanie Louise Girard Farmer, 40, a resident of Remington, Indiana, passed away Monday, November 8, 2021 in Kankakee, Illinois. Stephanie was born in Rensselaer, Indiana on October 30, 1981, the daughter of John David and Joan L. (Henry) Girard. Stephanie graduated from Postville High School in Iowa. She then attended Iowa State University in Ames, IA and culinary school at Des Moines Area Community College, earning her Associate Degree. She married Vernon Joseph Farmer on June 29, 2016, in Louisville, KY and he survives. Stephanie formerly worked at Bob and Connie’s restaurant in Remington, IN and was employed as a chef in Montana, Kentucky, and Indiana. She was affiliated with the Presbyterian Church and was a member of the American Legion Harold J. Davis Post #247 in Remington. Stephanie is survived by her husband, Vernon Farmer; her mother, Joan; and her daughters, Magnolia J. Farmer and Rose M. Farmer. Stephanie was preceded in death by her father, John. Friends may call on the family at Jackson Funeral Chapel of Rensselaer on Monday, November 22, 2021 from 11:00 a.m. to 2:00 p.m. A funeral service will be held immediately following at Jackson Funeral Chapel at 2:00 p.m. with Tammy Culp officiating. In lieu of flowers, memorial contributions may be made to the family for funeral expenses by procuring an envelope at Jackson Funeral Chapel or visiting www.fundthefuneral.com

The family of Stephanie Louise Farmer created this Life Tributes page to make it easy to share your memories.

Send flowers to the Farmer family.