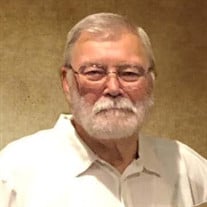 Steven L. Reames Sr., age 72, of Rensselaer, formerly of Monticello, passed away on Sunday, December 19, 2021, at his residence. Steve was born in Lafayette, IN on December 12, 1949, the son of Elmer L. and Imogene (Suiter) Reames. Steve graduated from Twin Lakes High School with the Class of 1968. After graduating, he attended Law Enforcement Training at Tri-State University. He married Virginia “Ginny” Mae Hoffman on August 26, 2006, in Monticello, IN and she survives. Steve worked as a Sales Representative for Geoconex in Knoxville, TN. Prior to that, he was proud to have worked at the Jasper County Sheriff’s office for twenty-four years; eight of those years, from 1987 – 1995, he served as the Jasper County Sheriff. Steve was a member of the First Church of Wheatfield, IN. He was a member of the Indiana Sheriff’s Association, the Association of Professional Communication Officers, and the National Emergency Number Association. Steve loved to work and care for his family. He loved spending time with his children, grandchildren, and his best fur baby, Fiona. He will be missed dearly by his family and community. Steve is survived by his wife, Ginny; children, Steven L. (Autum) Reames Jr. of Buffalo, IN, Anne (Joe) Hager of Lafayette, IN, Heidi Wiseman of Birmingham, AL, Colleen L. Johnson of Rensselaer, IN, and Traci Magers of Rensselaer, IN; grandchildren, Jasmine Reames, Tean Reames, Clayton Reames, McKenna Henry, Brienna Henry, Jaden Johnson, Ryan Anderson, Joey Hager, Brooke Lewis, Christopher Propes, Bailey Lewis, and Elizabeth Price; two great grandchildren; and his fur baby Fiona. He was preceded in death by his parents and a daughter, Barbara Propes. Friends may call on the family on Wednesday, December 22, 2021, from 3:00 p.m. to 8:00 p.m. CST at Jackson Funeral Chapel of Rensselaer. A funeral service will be held on Thursday, December 23, 2021, at Jackson Funeral Chapel of Rensselaer at 10:30 a.m. CST with Pastor Zachary Fraley officiating. Interment will follow at Memory Gardens of Rensselaer. Memorials may be made to the CLL Society for chronic lymphocytic leukemia at https://cllsociety.org/donate-to-cll-society/ or the Friends of the Jasper County Animal Shelter.

Steven L. Reames Sr., age 72, of Rensselaer, formerly of Monticello, passed away on Sunday, December 19, 2021, at his residence. Steve was born in Lafayette, IN on December 12, 1949, the son of Elmer L. and Imogene (Suiter) Reames. Steve graduated... View Obituary & Service Information

The family of Steven L. Reames created this Life Tributes page to make it easy to share your memories.

Send flowers to the Reames family.