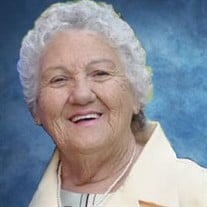 Sue Hayes, 84, of Rensselaer, IN passed away at her home on Saturday, August 31, 2019. Susie Elouise (nee Randolph) Hayes was born on March 24, 1935 in Cumberland County, Tennessee to Jeff and Hattie (nee Emery) Randolph. Her family moved to Indiana when Sue was 6 years old. She attended the Mount Ayr and Fair Oaks schools. On June 1, 1952 Sue married Vurnie Edward Hayes in a ceremony at her folk’s home. Vurnie preceded her in death on November 28, 2004. Sue and Vurnie were married for 52 years and are the parents of three children, Sheila (Dale) Calvert of French Lick, Indiana, and Vurnie Dwight (Debi Jo) Hayes and Gayla Hayes, both of Rensselaer, Indiana.. She was blessed with 8 grandchildren, Ryan (Stephenie) Budd, Rachel (Joshua) Jorgensen, Joseph (Heather) Hayes, Stacy Hayes, Nikki (Bob) Reynolds, Mandy (David) King, Nicole (William) Johnson and Raymond (Crystal) Calvert; 20 great grandchildren and 3 great-great grandchildren. Sue has one surviving sibling, her brother Ernie (Jeanette) Randolph of Rensselaer, Indiana. She was preceded in death by her parents, her loving husband and 8 siblings, Earl, Elton and Elbert Randolph, Eunice Lamb, Mae Keen, Estella Northcutt, Geneva Collis and Loretta Mullins. She was a member of the First Baptist Church of Rensselaer. Sue had several jobs over the years, at St. Joseph College where she was a cook, and at the former Northway Products and Schumacher Electric in Rensselaer and at Per Pak of Brook, Indiana. She was a caregiver for her mother for many years and continued working as a caregiver for many families in the community. She loved her job at the former Fashion Bug ladies retail store in Rensselaer where she never met a stranger. She also enjoyed working the polls on Election Day, although she was not fond of the “early morning” wake up! Sue will be remembered for her ready smile and hello to everyone she met. She loved life, her family and friends, her community, her church and the Lord. Friends may call at the Jackson Funeral Chapel in Rensselaer on Thursday, September 5, 2019 from 3:00 -8:00 pm. Funeral services for Sue will be held on Friday, September 6, 2019, at 10:30 am at the Jackson Funeral Chapel in Rensselaer with Deacon George Drain officiating. Burial will follow at Weston Cemetery, Rensselaer, Indiana.

Sue Hayes, 84, of Rensselaer, IN passed away at her home on Saturday, August 31, 2019. Susie Elouise (nee Randolph) Hayes was born on March 24, 1935 in Cumberland County, Tennessee to Jeff and Hattie (nee Emery) Randolph. Her family moved... View Obituary & Service Information

The family of Sue E. Hayes created this Life Tributes page to make it easy to share your memories.

Sue Hayes, 84, of Rensselaer, IN passed away at her home on Saturday,...

Send flowers to the Hayes family.