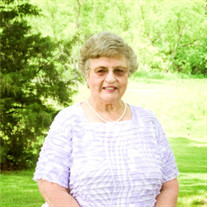 Susan M. Smith, 84, of Rensselaer, Indiana, passed away Tuesday, December 15, 2020 at her residence. She was born in Rensselaer, Indiana on January 30, 1936, the daughter of Ralph and Edna (Axen) Amsler. Susan married David L. Smith on March 16, 1954 in Columbus, Georgia and he preceded her in death in 1985. Susan was a lifetime resident of Rensselaer and the owner of Smith Oil Company. Susan served as the City of Rensselaer Clerk Treasurer from 1982-1996 and then went on to serve as the first female Mayor of Rensselaer from 1996-2000. She was a member of the Rensselaer City Council from 2000-2004. Susan was awarded the highest distinction in Indiana, the Sagamore of the Wabash, in 2004 by Governor Joe Kernan. Susan was especially proud of her grandkids and great-grandkids and loved spending time with them as much as possible. She really enjoyed following their sporting events. Susan herself enjoyed bowling and everyone knew she made the best chocolate chip cookies. Susan was a member of the Trinity United Methodist Church and served as President of the United Methodist Women for several years. She will be remembered fondly by her entire community. Susan is survived by her children, Robert L (Mary) Smith, Kimberly (Roger) Mathew, Dale (Samantha) Smith, Laurie Henry, Brian (Peggy) Smith, Shannon (Jim) Shanley; sister-in-law, Pauline Amsler; brother-in-law, Mike Smith; stepmother-in-law, Marge Carty; 19 grandchildren; 33 great-grandchildren; and several precious nieces and nephews. She was preceded in death by her parents, husband, brothers, James Amsler, Ralph Amsler Jr, John Amsler, one great-grandchild, and son-in-law, Preston Henry. The family has chosen to have private services. Jackson Funeral Chapel of Rensselaer has been entrusted with the arrangements. Social distancing, maximum number of people will be enforced, and masks must be worn at all services due to current pandemic.

Susan M. Smith, 84, of Rensselaer, Indiana, passed away Tuesday, December 15, 2020 at her residence. She was born in Rensselaer, Indiana on January 30, 1936, the daughter of Ralph and Edna (Axen) Amsler. Susan married David L. Smith on March... View Obituary & Service Information

The family of Susan M Smith created this Life Tributes page to make it easy to share your memories.

Send flowers to the Smith family.