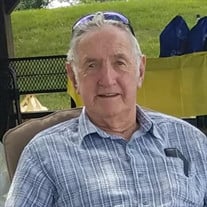 Thomas “Tom” Arnel Flick Sr., age 85, of Rensselaer, Indiana passed away peacefully at his home on Sunday, September 19, 2021. He was born on October 29, 1935 in French Lick, Indiana the son of Charles and Stella (Kellams) Flick, both deceased. Tom was a graduate of Spring Valley High School, Class of 1953. On July 19, 1958 he married Catherine Lucas who preceded him in death on April 14, 2009. Tom proudly served in the United States Army. He was employed with U.S. Steel for 30 years and also a self-employed farmer for over 25 years. Tom enjoyed fishing, his hometown of French Lick and cared deeply for his family. He especially enjoyed his grandchildren and watching them play sports. Tom is survived by his children: Mindy Capps of Lowell, IN; Kim Flick-Couture of Indianapolis, IN; Tom (Julie) Flick of Wheatfield, IN; Charley (Sue) Flick of Wheatfield, IN; Brian (Shelly) Flick of San Pierre, IN; 5 granddaughters and 3 grandsons: Kati Capps, Amanda Couture, Adrianne Flick, Bailey Flick, Braiden Flick, Madey Flick, Shelby Flick, and Brady Flick; and one perfect little great-granddaughter, Kenna Grace Capps; one surviving sister, Shirley (Vince) Crowder of Brazil, IN; and many nieces & nephews. Tom was preceded in death by his wife, 6 sisters, and 4 brothers. Family and friends may visit at Jackson Funeral Service of DeMotte on Friday, September 24, 2021 from 2:00 until 6:00 PM. A Funeral Service will immediately follow at 6:00 PM. Burial with military rights will be held on Saturday, September 25, 2021 at 2:00 PM (Eastern) at the Cane Creek Cemetery in French Lick, Indiana. Memorial contributions may be made in Tom’s name to the Cane Creek Christian Church.

The family of Thomas A. Flick created this Life Tributes page to make it easy to share your memories.

Send flowers to the Flick family.