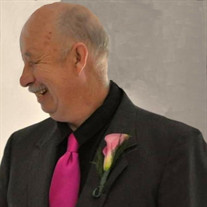 Truman Ritchie, 75, a lifelong resident of Rensselaer, Indiana, passed away Wednesday, February 3, 2021 at Franciscan Health Rensselaer. Truman was born in Tribbey, KY on December 21, 1945, the son of Edward and Myrtle (Dobson) Ritchie. Truman graduated from Wheatfield High School with the Class of 1964. He completed a 4 year apprenticeship at US Steel and underwent further training in the US Army. Truman was a business owner/electrician and was the proprietor of Ritchie Electric Motor Company from 2007-2018, when he sold the business and retired. He married the love of his life, Jacqueline Simms, on January 8, 1972 in Gary, IN and she survives him. Truman enjoyed music and playing his guitar. He liked all kinds of music and was an avid Beatles fan. He will be remembered as a funny, loving, and selfless guy, bringing smiles to many. Truman was also a very loving and tender man to anyone who knew him. He cherished his family and grandchildren to no end. His presence in their lives will be deeply missed. Truman was a member of the First Presbyterian Church of Rensselaer and previously a 33 year member of the Lake Village Presbyterian Church where he served as a Deacon and an Elder. He will be missed by his community of friends at church. He was also a member of the Wheatfield American Legion Post #406. Truman is survived by his wife, Jacqueline; children, David (Jolie) Ritchie of Demotte, IN, Jennifer Ritchie of Valparaiso, IN, Caitlin Ritchie of Rensselaer, IN; grandchildren, Zachary, Alissa, Michael, Alison; siblings, Thurman (Joy) Ritchie, Christina Bachman, Evelee Patrick, Millicent Howard, Eddie Lee (Dana) Ritchie, all of Rensselaer, IN, Orben Ritchie of Wheatfield, IN, and Wilma Jean (Marion) Kasten of Winamac, IN. Truman was preceded in death by his parents, one sister in law, Elsie Ritchie, and three brothers in law, Paul Bachman, Marvin Patrick, and JB Howard. Friends may call on the family at the First Presbyterian Church of Rensselaer on Friday, April 9, 2021 from 3:00 PM - 6:00 PM. A Funeral Service will be held immediately after visitation at the church, at 6:00 PM. Mask wearing and social distancing will be enforced per the current mandate of the Governor on the date of the service.

The family of Truman Ritchie created this Life Tributes page to make it easy to share your memories.

Send flowers to the Ritchie family.