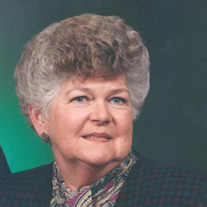 V. Evelyn Tysen, age 90, of DeMotte, passed away Tuesday, April 26, 2022 at Oak Grove Christian Retirement Village. On January 29, 1932 in Chicago, Illinois, Evelyn was born to Fred and Ellen (Berg) Hansen. She graduated from DeMotte High School, Class of 1950. Evelyn was married to her first husband, Joseph Donis, who preceded her in death in 1967. On April 7, 1972 she married Bernard Tysen in DeMotte and he also preceded her in death on October 8, 2011. Evelyn was co-owner of Tysen Grocery Store for over 25 years. She was a member of American Reformed Church, DeMotte. Evelyn is survived by her children: Theresa (Jeff) Landis of Lafayette, IN; Joseph Donis Jr. of Michigan City, IN; and Larry (Darlene) Donis of DeMotte, IN; 10 grandchildren and 26 great-grandchildren. She is preceded in death by her parents, Fred & Ellen; first husband, Joseph Donis and second husband, Bernard Tysen; granddaughter, Taylor Donis; and daughter-in-law, Cindy Donis. Friends and family may visit at Jackson Funeral Service of DeMotte on Friday, April 29, 2022 from 9:00 until 11:00 AM. A funeral service will follow promptly on Friday, at 11:00 AM with Pastor Troy Nanninga officiating. Interment will be held at Faith Lutheran Cemetery. Memorial contributions may be made in Evelyn’s name to Oak Grove Retirement Village or VNA Hospice.

The family of V. Evelyn Tysen created this Life Tributes page to make it easy to share your memories.

Send flowers to the Tysen family.