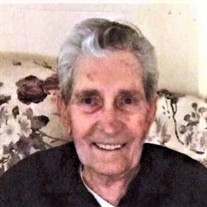 Vernon B. James of Rensselaer, Indiana went home to be with Jesus on August 18, 2018 at his residence. He was born on November 10, 1929 in Haleyville, Alabama.On May 6, 1950 he married Ruth Ann Wingard. He walked with God for 55 years. Vernon and Ruth Ann prayed with many people to salvation during their marriage. They were co-founders of the Apostolic Faith Assembly Pentecostal Church in Mt. Ayr, Indiana in 1998. Vernon enjoyed working in his garden and lawn, and always found something to help keep himself busy. He never met a stranger. Many people that were not “blood related” were still held close to his heart as a brother, sister, son, daughter or grandchild. He will be missed by all that new him. Vernon worked for New York Central, Penn Central, and Conrail Railroad for 42 years and was a member of the Brotherhood of Signalmen Local #68. On July 8, 2004 he was blessed by marrying Donna Baldovin. She loved and cared for him up to the end. Vernon was preceded in death by his parents, Emmit and Pearl James, his first wife, Ruth Ann James on March 13, 2003, brothers, Doc, Junior and L.C., and his sisters, Flossie Lauderdale, Betty Goddard, Billie Hicks and Maxine Hinson. Surviving are his wife, Donna Baldovin James, daughter, Deborah Stickler (Glen) of Middletown, Delaware, son, Michael E. James (Glenda) of Rensselaer, Indiana, stepsons, Doug Glader of Burlington, Iowa, Dan Baldovin of Rensselaer, Indiana, and stepdaughter, Raeann Johnson of DeMotte, Indiana; grandsons, Shawn Stickler (Stephanie), Kevin Stickler (Jessica), granddaughter Angela James Vest (James), step grandsons, Joshua Glader, Steve Glader, James Johnson (Boke) and step granddaughter Raegan Johnson. He had 4 great granddaughters and 2 great grandsons; sisters Delphia Carlisle (Alfred) and Shelby Madsen (Rodger) and many nieces and nephews. Friends may call at the Jackson Funeral Chapel of Rensselaer Thursday, August 23, 2018 from 4:00 to 8:00 p.m. CDT. A celebration of his life will be held at 1:00 p.m. CDT on Friday, August 24, 2018 at the Apostolic Faith Assembly Pentecostal Church in Mt. Ayr, Indiana. Pastor Michael E. James and Pastor Glen A. Stickler officiating. Burial will follow at Memory Gardens Cemetery, Rensselaer, Indiana. Memorials are suggested to the Apostolic Faith Assembly Pentecostal Church, Mt. Ayr, IN or to PhysioCare Home Healthcare and Hospice, 625 S. Earl Ave., Lafayette, Indiana 47904.

Vernon B. James of Rensselaer, Indiana went home to be with Jesus on August 18, 2018 at his residence. He was born on November 10, 1929 in Haleyville, Alabama.On May 6, 1950 he married Ruth Ann Wingard. He walked with God for 55 years. Vernon... View Obituary & Service Information

The family of Vernon B. James created this Life Tributes page to make it easy to share your memories.

Vernon B. James of Rensselaer, Indiana went home to be with Jesus...

Send flowers to the James family.