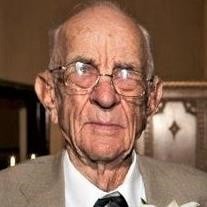 Victor "Vic" Paul Liersch, 94 of Rensselaer, IN died peacefully at St. Franciscan AlternaCare on Monday, January 6, 2020, surrounded by his loving family. A Veteran of World War II, he served in the Ninth Division of the U.S. Army where he was a Corporal. Vic was born on January 12, 1925 in Rensselaer, IN to Paul and Emma {Fechner) Liersch. Vic attended school in Barkley Township until the 8th grade. After that, he helped on the family farm during the Depression Era, until he joined the service. He went into the service on April 13, 1944 and completed basic training in Camp Wheeler, Georgia prior to being sent overseas. In September 1944, he was sent overseas to England, from there France and Belgium . During the end of 1944, Vic ended up being posted near the last major German offensive campaign of the war, in a densely forested area that spanned Belgium, France and Luxembourg. His duty was to stand guard near the Battle of the Bulge. On January 23, 1945, Vic was in Monschau, Germany right on the Belgium border . It was an occasion he will never forget. His troop was advancing against a strongly fortified enemy position and was subject to intense enemy machine gun and small arms fire. Working his way forward to within close range of an enemy's trench Pfc. Victor Liersch threw two hand grenades into the emplacement where he killed one of the enemies and forced another to surrender immediately. Able to speak German, he ordered his prisoner to shout to the remaining Germans to surrender themselves. Pfc. Liersch's aggressive initiative, complete disregard for personal safety, and courageous actions enabled his squad to capture three of the enemies and contributed materially to the success of the operation. With this being said he was honored with the Bronze Star award. After this capture, he was returning back to duty when he stepped on a land mine that took off part of his left leg. He then was honored with the Purple Heart. Reminding you, this all happened on the same day! After his injury he was sent to a hospital in Belgium, then England for a month or two. He returned home to a hospital in Temple, TX and from there to Battle Creek, MI. He was discharged on September 21, 1946. Vic went back home and never said a word about his time in the war. The only thing he said was "If that's the worst thing that happened to me I am going to be pretty lucky." Vic was a brave and loyal and very humbled soldier, as well as a loving husband, father, grandfather and great­ grandfather. He married Esther Ellen (Misch) on October 25, 1952 in Rensselaer at St. Luke's Lutheran Church. She preceded him in death on November 26, 2018. A natural farmer and excavator, he owned and operated Liersch & Sons Excavating for over 40 years. He dug in just about every field in Jasper and surrounding counties. He never knew a stranger and had a great sense of pride in the work he did for others. He was a good man, a good neighbor and a good Christian. He never complained about the situation he was given, and wouldn't want to be treated any differently. He is survived by his four children, Roger (Barb) Liersch, Steven (companion Norma Schultz), Liersch, Sandra (James) Miller and Cathy (Ed) Lane all from Rensselaer. He is also survived by his seven grandchildren, and 11 great-grandchildren, Sister-in-law Karen Liersch and brother-in-law William (Mary) Misch, and several nieces and nephews. He was preceded in death by his loving wife, Esther, his parents Paul and Emma, two brothers, James and Max Liersch and a sister Edith Liersch. Victor was an inspiration to many people and he always said "A little hard work never hurt anybody." We should all live by that. Friends may call at the Jackson Funeral Chapel in Rensselaer on Thursday, January 9, 2020 from 2:00 to 7:00 pm. Funeral services will be held at 10:30 am on Friday, January 10, 2020 at the Rensselaer St. John Lutheran Church with Pastor David Mueller officiating. Burial at St. John Lutheran Cemetery with military honors will follow. Memorials may be made to St. John's Lutheran Church.

Victor "Vic" Paul Liersch, 94 of Rensselaer, IN died peacefully at St. Franciscan AlternaCare on Monday, January 6, 2020, surrounded by his loving family. A Veteran of World War II, he served in the Ninth Division of the U.S. Army where he was... View Obituary & Service Information

The family of Victor P. "Vic" Liersch created this Life Tributes page to make it easy to share your memories.

Send flowers to the Liersch family.