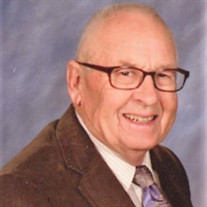 William “Bill” Arthur Brinker, age 88, passed away peacefully and went to be with his Lord on September 16, 2020. He was born on June 23, 1932 in Lapeer County, Michigan, the son of the late Arthur and Irene (Burke) Brinker. On July 25, 1953, Bill was united in marriage to Marilyn Louise Smith in Imlay City, Michigan. Shortly after, they made Imlay City their home on the family farm where they raised three beloved children. Bill worked the farm for over 60 years. In 1972, he worked for Champion Motor Home and then worked for Lapeer Schools until he retired in 1996. In 2010, Bill, Marilyn, and their daughter, Lorrie, moved to Rensselaer, Indiana. Bill was a faithful member of the Imlay City Sacred Heart Church and St. Augustine Catholic Church in Rensselaer, Indiana. He had a passion for golf, cards, hunting, bowling, fishing and gun craft. He spent many hours woodworking and helping Marilyn with a large garden. In the spring, Bill was in the woods making maple syrup. Bill was preceded in death by his parents and sister, Marguerite (Warren) Gibbard. He leaves to cherish his loving memory, his wife Marilyn Brinker; three daughters, Denise (Michael) Curtis, Morgantown, Indiana, Jean (Ron) Fredrick, Rensselaer, Indiana, Lorrie Brinker, Rensselaer, Indiana; four beloved grandchildren, Joshua (Lauren) Curtis and Isaac (Sarah) Curtis, Denver, Colorado, Jessica (Sean) Cawby, Rensselaer, Indiana, William (Valarie) Fredrick, Goodland, Indiana and nine adored great-grandchildren. Private family services and a Mass for the Celebration of Bill’s life will take place at a later date to be determined. Memorials may be made to the Rensselaer Care Center.

The family of William "Bill" Arthur Brinker created this Life Tributes page to make it easy to share your memories.

Send flowers to the Brinker family.