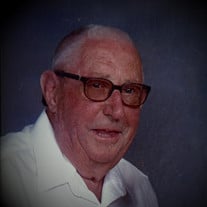 William J. “Bill” Miller, age 95, of Mt. Ayr, Indiana passed away November 21, 2019 at Franciscan Health St. Elizabeth East Hospital in Lafayette, Indiana. Bill was born in Fair Oaks, Indiana on November 6, 1924, the son of Jessie and Elizabeth (nee Hemuth) Miller. Bill attended both the Fair Oaks and the Mt. Ayr schools. He left school and began farming. He truly loved being a farmer. Farming was an occupation he never retired from, as he continued to help in bringing in this fall’s harvest. A veteran of the U. S. Army, Bill served in World War II. He was a member of the Mt. Ayr United Methodist Church, the American Legion Post No. 146 in Morocco, Indiana and a member of the former Curtis Creek Conservation Club. Bill enjoyed a good game of dart ball, playing golf and going bowling. He was a skilled woodworker and took great joy in making furniture from trees that came from his own property. On June 16, 1951, in Goodland, Indiana Bill and Norma L. Fisher were married. They became parents of two son’s , Donald (wife Becky) Miller of Morocco, Indiana and the late James Miller. They were loving grandparents to Lori (husband Kevin) Hyatt, Ross (wife Rachel) Miller, David (wife Jennifer) Miller, Cale (wife June) Miller and Ethan Miller, and 16 great-grandchildren. Other survivors include a daughter-in-law, Charlotte Miller of Lafayette, Indiana, one brother, Jerome Miller and two sisters, Grace (husband Paul) Pressler and Gertrude Miller. Bill was preceded in death by his parents Jessie and Elizabeth Miller, his wife Norma who passed away on December 4, 2016, his son, James who passed away September 1, 2015 and his siblings Henry Miller, Clara Schrock, Aldi Schlabach, Noah Miller and David Miller. Friends may call at the Jackson Funeral Chapel in Rensselaer on Tuesday, November 26, 2019 from 10:00 am to 12:00 pm. Funeral services will follow at 12:00 pm on Tuesday at the Jackson Funeral Chapel in Rensselaer with Pastor Robert Rawlins officiating. Burial will be at Weston Cemetery, Rensselaer, Indiana. Memorials are suggested to the Mt. Ayr Methodist Church, P.O. Box 354, Mt. Ayr, IN 47964.

The family of William J. Miller created this Life Tributes page to make it easy to share your memories.

Send flowers to the Miller family.