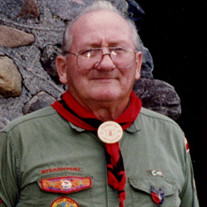 William Paul Gates Jr., age 92, passed away on February 21, 2018 at Franciscan Health Rensselaer. He was born in Rensselaer on February 21, 1926 to the late William Paul Gates, Sr. and Mabel Clara (Eldridge) Gates. On December 24, 1947, he married Helen Ruth Barker who preceded him in death in 1979. Paul was a lifelong resident of Rensselaer, except for 7 years when he lived in Hessville, IN, and Cedar Lake, IN. He was a 1944 graduate of Rensselaer Central High School and a member of the Rensselaer Church of the Nazarene. Paul served in the Army Air Corp from 1944-1946 as a B-24 Bomber Aerial Gunner. Paul was a licensed Master Cosmetologist alongside his wife, Ruth. He owned and operated, Paul's Beauty Salon in Rensselaer, IN, from 1965 to the mid 1980's. Prior to that, he had a beauty salon in Hammond, IN and another in Cedar Lake, IN. He enjoyed big band music and led a fifteen piece dance band for 17 years called The Paul Gates' Kings of Rhythm, where he played the trumpet and the trombone. Paul was a life-long member of the V.F.W Post #1279 and served on the House Committee for several years. He was also a member of the American Legion Post #29, Rensselaer Lion's Club, Steering Committee of the Weston Cemetery North, and the Alumni Achievement Awards Committee. Paul worked with the Boy Scouts of America most of his life, earning the rank of Eagle Scout in 1939. He was able to witness his son, 5 grandchildren, and great-grandson also achieve this special honor. Paul volunteered as a Boy Scout Leader, District Camping and Activities Director, Troop Committee Man, an Institutional Representative for Troop152, and part of the Board of Directors of Camp Kanne, Inc., serving a period as President. Paul is survived by his children, Susan (Michael) Miller of Rensselaer, IN, Teresa (Dennis) Garriotte of Naples, FL, John (Nancy) Gates of Indianapolis, IN, and Larry (Lisa) Gates of Brownsburg, IN. In addition, he is survived by his twelve grandchildren, Debbie (Steve) Walker, Kelly (Joe) Longenecker, Troy (Amy) Miller, Jason Garriotte, Brian (Jill) Garriotte, Jeff Garriotte, Charles Gates, Lawrence Gates, James Gates, Richard Gates, Rachel Gates, and Ryan (Madison) Gates and eight great-grandchildren, Eric Walker, Avery Walker, Joel Walker, Garrett Longenecker, Paige Longenecker, Kathryn Garriotte, Elizabeth Miller and Rebecca Miller. Also surviving, Paul's special friend and companion, Miriam Steinkamp of Rensselaer, IN. Paul was preceded in death by his parents, wife, sister, Barbara Brown, granddaughter, Helen Miller, and friend Helen Urbanczyk. Per Paul's wishes, there will be cremation with private graveside services at a later date.

The family of William Paul Gates created this Life Tributes page to make it easy to share your memories.

Send flowers to the Gates family.