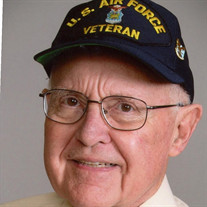 William P. “Bill” Valade of Rensselaer passed away Thursday, January 16, 2020 at St. Mary’s Healthcare in Lafayette, Indiana. Bill was born on June 14, 1940 in Hammond, Indiana, the son of Philip H. and Laura (Vallier) Valade. He grew up in Rensselaer where he graduated from Rensselaer High School with the Class of 1959. Bill joined the U.S. Air Force and was honorably discharged on July 20, 1964. On November 26, 1966, in Rensselaer, Bill married Frances M. Korniak. Bill and Fran resided in Rensselaer where he was an electrician and owner of Valade Electric. He worked for many years as the electrician at the Jasper County Fairgrounds. Bill was a faithful member of St. Augustine Catholic Church in Rensselaer. He loved to design things and was instrumental in the start up of the Rensselaer High School Building Trades program where he gave of his time and talents for many years. Bill will be remembered and missed most for his jack-of-all-trades skills. Bill was a skilled woodworker and enjoyed making furniture. He was a member of the former Pastel’s band, playing both the guitar and the harmonica. Bill enjoyed working with the Boy Scouts program and loved antique cars. He was not afraid to reach out and help those in need and was known to bring folks home for a warm meal and shelter. Surviving with his loving wife Fran are three children, Philip Paul Valade of Ft. Wayne, Indiana, Joan Marie Lindstrom of Rensselaer, Indiana and Theresa Marie (Robert) Valade of Chesterton, Indiana, four grandchildren, Kila Lindstrom, Michelle Lindstrom, Austin (Alyssa) Valade and Abigail Valade and three great-grandchildren, Zayn, Adaline and Levi. Bill is also survived by a sister, Roseann (Tony) Nagel of Fair Oaks, Indiana and Fred (Pennye) Valade of Farmington, New Mexico. Friends may call Sunday, January 19, 2020 from 2:00 to 8:00 p.m. at the Jackson Funeral Chapel in Rensselaer where Rosary services will be held at 7:00 p.m. Funeral mass will be held at 10:30 a.m. Monday, January 20, 2020 at the St. Augustine Catholic Church in Rensselaer with Father Rick Nagel officiating. Burial with military honors will follow at Mt. Calvary Cemetery in Rensselaer. Memorials are suggested to the St. Augustine Catholic School, Franciscan Hospice or the Alzheimer’s Association.

The family of Willliam P. "Bill" Valade created this Life Tributes page to make it easy to share your memories.

Send flowers to the Valade family.