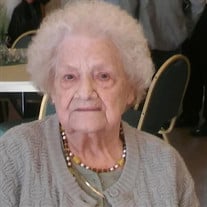 Wilma E. Hornbeck, age 94, of Rensselaer, Indiana passed away April 1, 2018, at White Oaks Healthcare in Monticello, Indiana. Wilma, the daughter of Sikko and Zada (Heater) Swartz, was born on March 30, 1924, in Seafield, Indiana. She was raised in White County, Indiana where she graduated from Wolcott High School. Her marriage was in Monticello, Indiana on January 27, 1951, to Donald C. “Don” Hornbeck. He proceeded her in death on May 21, 2004. Wilma was employed in various county offices in White County. After moving to Rensselaer, she was elected to the position of Jasper County Treasurer, serving two terms from 1977 - 1984. Wilma attended the Faith Christian Tabernacle Church near Rensselaer. She was a hard worker and faithful 58-year member of the Rensselaer V.F.W. Post #1279 Auxiliary and a member of the Rensselaer American Legion Post #29 Women’s Auxiliary. Wilma liked to keep her mind sharp and enjoyed the challenge of working crossword puzzles, the game Suduka and jigsaw puzzles. She also enjoyed reading and cultivating her garden. Wilma was an avid sports fan of both the Chicago Cubs and the Chicago Bears and could often be found watching her team during baseball and football seasons. Wilma enjoyed cooking and hosting family dinners and holidays at her home. Surviving Wilma are her loving children, Greg (Kim) Walden of Monticello, IN, Donya (Delmar Sr.) Jordan and Doug (Lisa) Hornbeck both of Rensselaer, IN and David (Cheryl) Hornbeck of Remington, IN; 15 grandchildren, 40 great-grandchildren, 8 great-great grandchildren and her siblings, Evanelle Wilson and June (Earl) Hornback both of Monticello, IN, Stanley (Carol) Swartz of Arizona and Kay (Gene) Abbott of Crawfordsville, IN. Wilma was preceded in death by her parents, her husband Don, a granddaughter, Melissa Durflinger and two sisters, Mary Spear and Alice Mikesell. Friends will be received at the Jackson Funeral Chapel of Rensselaer on Saturday, April 7, 2018, from 9:30 AM to 11:00 AM CDT. Funeral services for Wilma Hornbeck will be held Saturday at 11:00 AM CDT at the Jackson Funeral Chapel of Rensselaer with Dr. James Blanchard officiating. Burial will follow at the Bedford Cemetery, Monon, Indiana. Memorials are suggested to the Rensselaer V.F.W. Post #1279 Auxiliary, 315 E. Maple St., Rensselaer, IN 47978.

Wilma E. Hornbeck, age 94, of Rensselaer, Indiana passed away April 1, 2018, at White Oaks Healthcare in Monticello, Indiana. Wilma, the daughter of Sikko and Zada (Heater) Swartz, was born on March 30, 1924, in Seafield, Indiana. She was raised... View Obituary & Service Information

The family of Wilma E. Hornbeck created this Life Tributes page to make it easy to share your memories.

Send flowers to the Hornbeck family.