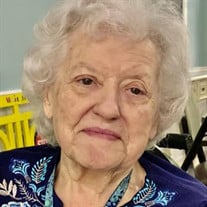 Wilma “Gilmore “ Teach, of Indianapolis passed away February 29, 2020 in Austell, Georgia at the age of 86. She was born November 6, 1933 in Rensselaer, Indiana to William and Jeannette (Walker) Gilmore. She was the oldest of three children. Wilma married Paul Teach on September 2, 1953 in Rensselaer, Indiana. Her survivors include: one son, Jeff Teach and daughter-in-law Karen, one daughter Debbie Coldiron and son-in-law Jeff, five grandchildren: Brad, Heather, and Richard Teach, Beckie Lincoln, and Jake Coldiron, five great-grandchildren: Liam, Emily, Athena, Isaac Teach and Hudson Lincoln. She was preceded in death by her parents, her husband Paul Teach, a brother Bill Gilmore, sister Beverly Gray, and grandson Brandon Coldiron. Wilma spoke of her children, grandchildren, and great-grandchildren with great passion and fondness. Wilma graduated from Indiana University with a BS and MS in Education. She worked for Central Nine Career Center and taught Computerized Accounting from 1972 to 1993. During her career as an educator, she developed the first computerized accounting in the state. Mrs. Teach traveled with her students to compete in competitions around the United States and Canada in Nationals for Accounting and Parliamentary Procedures. Wilma was a longtime member of Southport United Methodist Church and was an Eastern Star. Wilma enjoyed painting, dancing, traveling, playing cards, Dominoes, fishing, reading and sewing. Some of her greatest memories are spending time with her family in Minnesota, Indiana, and Georgia. Wilma loved to travel with her husband, Paul, during their retirement years by going on vacations, spending time at Lake Lemon, ballroom dancing and spending the winters in Harlingen, Texas. Visitation will be at Jackson Funeral Chapel in Rensselaer on Saturday, March 7, 2020 from 12:00-1:00 PM with a funeral service beginning at 1:00 PM. Burial will take place after the service at Memory Gardens of Rensselaer. In lieu of flowers, the family is requesting donations be made to the American Heart Association or Wheeler Mission in memory of Wilma Teach.

The family of Wilma Jeannette Teach created this Life Tributes page to make it easy to share your memories.

Send flowers to the Teach family.